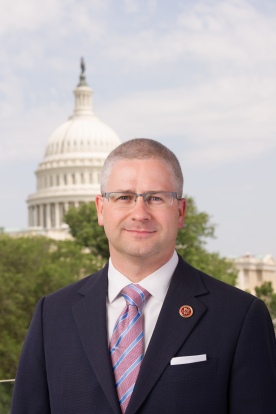 Patrick McHenry was first elected to the U.S. House of Representatives in 2004 to represent the 10th Congressional District of North Carolina. He represents all or parts of eight counties in western North Carolina, from the suburbs of Charlotte to Asheville.

Rep. McHenry received a B.A. in history from Belmont Abbey College and served in the North Carolina House of Representatives from 2003-2004. He also served as Special Assistant to the Secretary of the U.S. Department of Labor, a post he was appointed to by then-President George W. Bush.

Following the retirement of Jeb Hensarling (TX), Rep. McHenry became the top Republican on the House Financial Services Committee when the 116th Congress began on January 3, 2019.

Why he’s important to agents:

With the Democrats in the majority, Rep. McHenry is serving as leader, or Ranking Member, of the minority Republicans, on the House Financial Services Committee. In his role as Ranking Member, Rep. McHenry will be influential on issues considered before the committee, including the reauthorization of the National Flood Insurance Program (NFIP), data security legislation, the reauthorization of the terrorism risk insurance program (known as TRIA), and international insurance and regulatory issues.

PIA National looks forward to working with Rep. McHenry on these important issues during this Congress.

Negotiations have stalled between the White House and Capitol Hill over new stimulus package. Read the latest blog post #LinkinBio⠀
Senate passes PPP Flexibility Bill allowing for business to spend less on the payroll. Read the latest blog by @pia_national ‘s Jon Gentile. #LinkinBio
PIA National has been working with industry colleagues on a solution for many struggling businesses. Read more on the latest blog post by @pia_national ‘s Jon Gentile. #Linkinbio⠀
Senate passed more funds for the Paycheck Protection Program for small businesses. Read our latest blog post. #Linkinbio⠀
Several bills have been proposed by Congress to address the #COVID19 pandemic. @PIA_National ‘s Jon Gentile dives into our positions on the major policy proposals in this recent blog post #Linkinbio⠀
We’re all on this long road together, and PIA National is here to help. PIA National is collaborating with NAIC and NIPR to help protect small businesses to get back to (normal) business as soon as possible. #Linkinbio⠀⠀