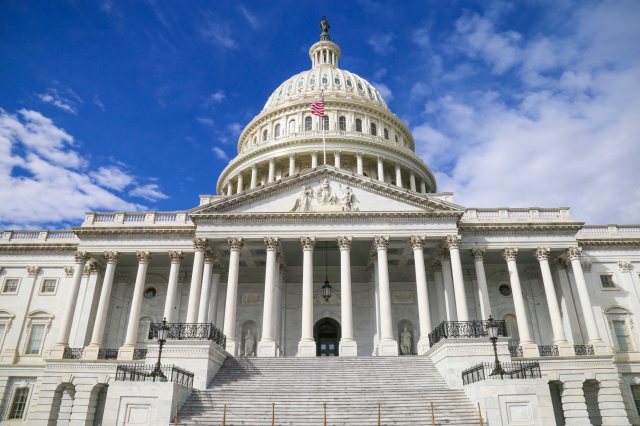 The 116th Congress was sworn into office today, January 3rd, 2019. This new Congress brings a divided Congress to Washington, D.C. for the first-time during President Trump’s administration.  The Democratic party is now in control of the U.S. House of Representatives with a makeup of 235-199 (with one seat remaining unoccupied because its result remains in dispute). The U.S. Senate will continue to be led by the Republicans, who picked up two seats in an increase to their majority, for a total of 53 Republicans and 47 Democrats (including 2 independents who caucus with Democrats).

The Speaker-designate, Nancy Pelosi (D-CA), is expected to be elected formally today, as will the incoming Majority Leader Steny Hoyer (D-MD). Rep. Jim Clyburn (D-SC) will serve as Majority Whip. The Republicans will welcome a new Minority Leader in the House, Kevin McCarthy (R-CA), who takes over as leader of the GOP caucus with the retirement of outgoing speaker Paul Ryan (R-WI). Rep. Steve Scalise will serve as Minority Whip. On the Senate side, Senators Mitch McConnell (R-KY) and Chuck Schumer (D-NY) will remain as majority and minority leader, respectively.

A new Congress brings major changes to the makeup of the committees that have jurisdiction over federal insurance issues. The House Financial Services Committee has perhaps the greatest number of changes; it will convene in January with only 70 percent of its incumbents after losing 18 members—six Republicans who lost their races in addition to the 12 members (seven Republicans and five Democrats) who chose not to run for reelection.

Rep. Maxine Waters (D-CA) will serve as chairwoman of the House Financial Services Committee. The Republican ranking member is Rep. Patrick McHenry (R-NC), who served as the Chief Deputy Whip during the 115th Congress. Rep. McHenry fills a vacancy created with the retirement of Jeb Hensarling (R-TX), who served as the House Financial Services Chairman during the 115th Congress. The Senate Banking Committee leadership remains the same, with Senator Mike Crapo (R-ID) serving as chairman and Senator Sherrod Brown (D-OH) the ranking Democrat.

The House Agriculture Committee will also see new leadership for the 116th Congress. Rep. Collin Peterson (D-MN), formerly the ranking member, became the new Chairman. Rep. Mike Conway (R-TX), who served as the committee’s Chairman in the 115th Congress, is the new ranking member. In the 115th Congress, Reps. Peterson and Conaway, along with their counterparts in the Senate, spearheaded the passage of the 2018 Farm Bill, which includes the federal crop insurance program. The leadership of the Senate Agriculture Committee remains the same in the new Congress, with Senator Pat Roberts (R-KS) chairing the committee and Senator Debbie Stabenow (D-MI) serving as the Democratic ranking member.

A new Congress means that all legislation that was introduced but not passed by both chambers and signed into law will now be effectively erased. PIA National has already begun working with congressional allies to begin the process of reintroducing legislation important to independent insurance agents.

PIA National looks forward to working with members of the new Congress.

Negotiations have stalled between the White House and Capitol Hill over new stimulus package. Read the latest blog post #LinkinBio⠀
Senate passes PPP Flexibility Bill allowing for business to spend less on the payroll. Read the latest blog by @pia_national ‘s Jon Gentile. #LinkinBio
PIA National has been working with industry colleagues on a solution for many struggling businesses. Read more on the latest blog post by @pia_national ‘s Jon Gentile. #Linkinbio⠀
Senate passed more funds for the Paycheck Protection Program for small businesses. Read our latest blog post. #Linkinbio⠀
Several bills have been proposed by Congress to address the #COVID19 pandemic. @PIA_National ‘s Jon Gentile dives into our positions on the major policy proposals in this recent blog post #Linkinbio⠀
We’re all on this long road together, and PIA National is here to help. PIA National is collaborating with NAIC and NIPR to help protect small businesses to get back to (normal) business as soon as possible. #Linkinbio⠀⠀